As the close of the upland year rears its head over the horizon I allow myself to retrace my steps (if you’ll excuse the path pun) through a year that has seen a lot of variation for the North Lakes Upland Team.

January – February: It’s Not All stone 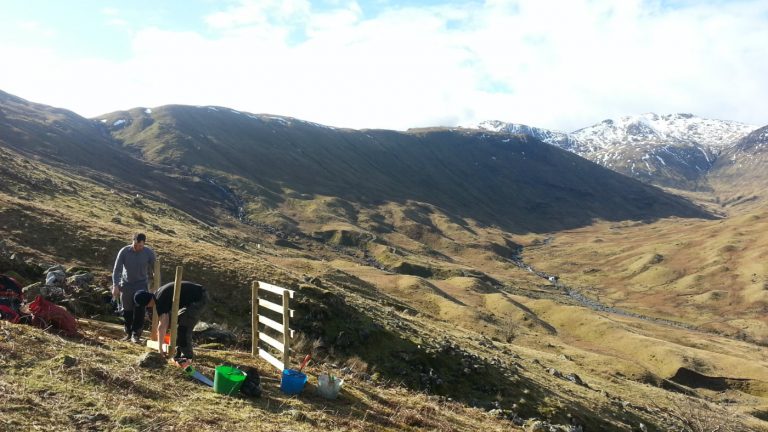 We began the year by completing our tree planting work in the Langstrath valley, at the head of the valley we built 100 timber tree cages which house up to three saplings. We planted a hardy mix of Birch, Willow and Privet which will be protected by grazing from sheep and deep and help to stabilise the fellsides whilst increasing biodiversity. Recent reports tell us that only three trees have perished in this incredibly hot weather, an impressive result; one that would have been hard to achieve without the help of our Fix the Fells Lengthsmen.
We we’re planting trees rather than pitching paths in January, as for around three months the conditions are too extreme in the uplands to undertake pathwork. 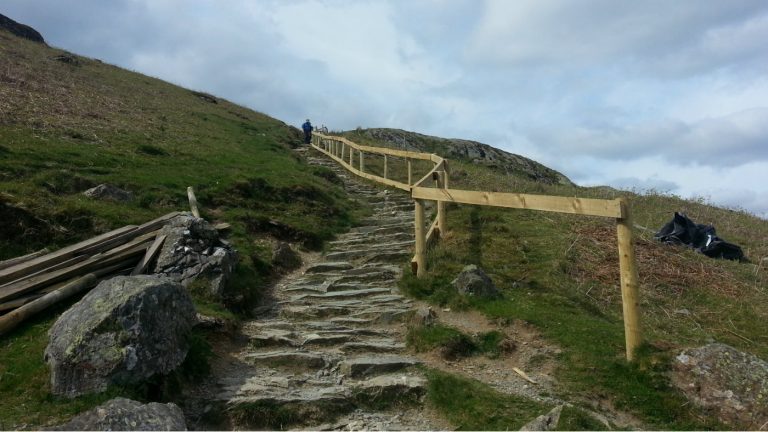 Catbells is a popular route for both walkers and mountain bikers, over the past two years a large portion of our time has been dedicated to preserving this iconic fell.
This year took us to the Manesty side of the path, repairing and future-proofing sections of damaged pitched path that were causing visitors to deviate from the route, increasing erosion. There was also the job of a 20 year old fence/much beloved handrail to replace which I hope will stand for the next two decades.

April – May: Fortifying the Castle

We’re always glad of an opportunity to improve our walling skills at the North Lakes, and our work on Castle Crag gave us just that. 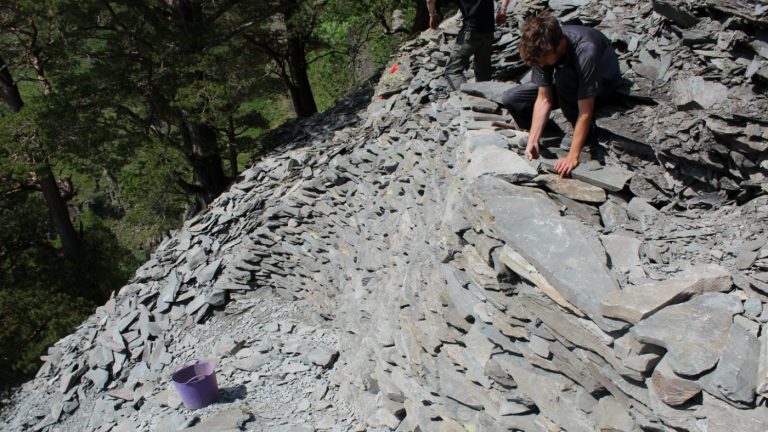 Those of you familiar with the smallest Wainwright will be aware of the scree path that takes you to the plateau just below the summit. The retaining walls that keep this scree from overwhelming the path were undermined and unstable in places and required a facelift.
Stone by stone we painstakingly took down the old wall so not to disturb the tones of scree it held back. Then in reverse of this, slowly but surely we built up our new wall which will protect the path for years to come.

May – June: Closure on the Enclosures

Waiting for permissions on stone extraction gave us a brief window to finish a job that we’d begun in the icy depths of winter, but had met with delay when all of our tools and equipment were buried by six feet of snow. 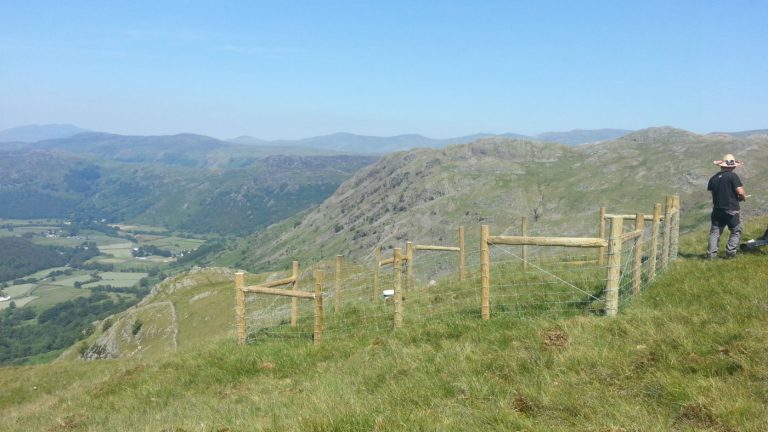 These structures are at the highest part of our recently acquired land at Thorneythwaite, we will use them to monitor the effects that occur when an upland landscape is left un-grazed. We’re all excited to see what species will move into these new miniature wild spaces.

Three of The Lakes upland Teams banded together to make some headway with the large project at Boredale Hause.
It is part of the epic Wainwright’s Coast to Coast route and in much need of some upland TLC. We lent a hand by building a series of drains and ‘waths’ on the lower sections. These stone structures will take water off the path to the tributaries in the valley below. 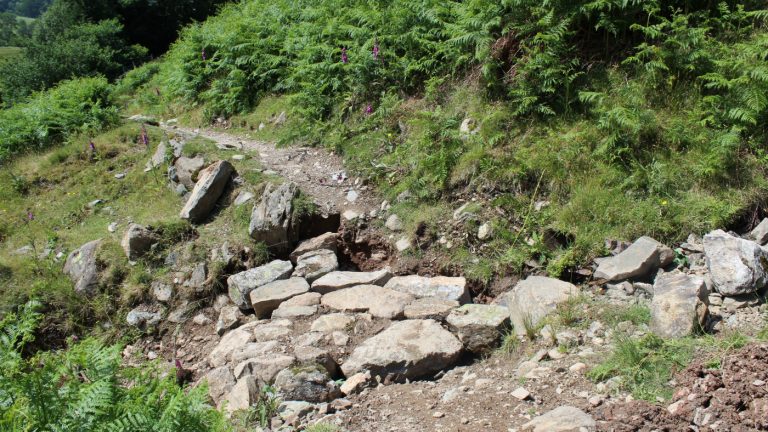 Once we’d received consent to extract stone from screes at Martindale the South Lakes and Central & East teams joined forces with us to fill 75 bags of stone. 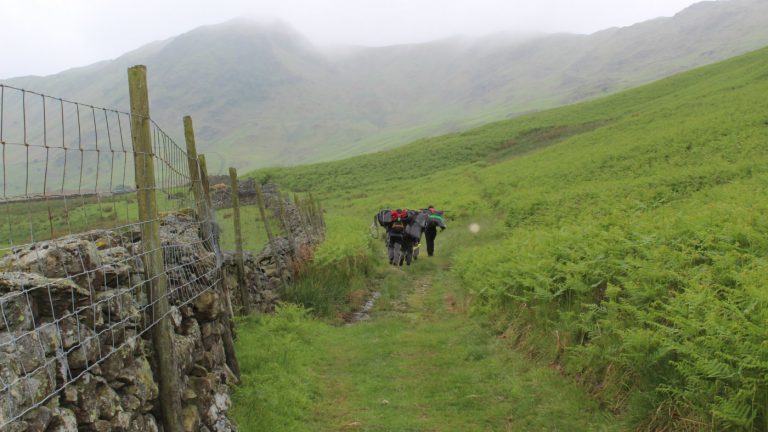 Strapping ourselves up with as many helibags as we could carry we plodded up the secluded valley to the agreed site and began filling. I found the selection of stone much easier this year, now having a year of pathwork under my belt I was able to imagine the exact use and position of every stone I placed into the bags.

July – September: A Long Way to go on Longstile 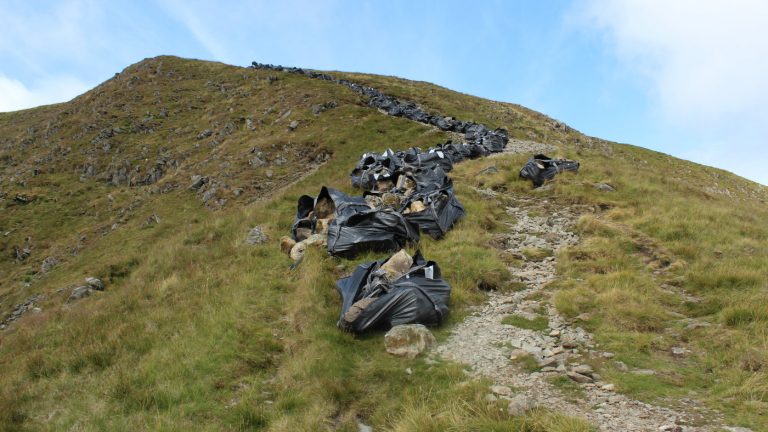 We then flew this material up to our last site of the year, where we have 70 metres of stone path to pitch on the Longstile ridgeline. The path itself is now down to bedrock with users taking various routes up and down, greatly increasing the width of the path. Surrounded by the Eastern Fells and sweeping views across the Eden Valley to the blue haze of the Pennines beyond, we’re digging in a defined line of stone path to prevent further erosion. It’s a site we feel very fortunate to end another year in the uplands on.