The Old Man Lower path along Church Beck is the principal access path directly from Coniston village that takes fell walkers and other visitors up the coppermines valley and on towards the summit of the Old Man of Coniston. For most of the year, it is an exceptionally popular and very well used path, and is shown in Wainwright’s pictorial guide to the southern fells as forming part of the so called ‘tourist’ route to the summit.

This path has been a designated Fix the Fells maintenance route since the first launch of the volunteer lengthsmen scheme in 2007 and is regularly maintained and monitored by Fix the Fells volunteers. It is an excellent example of partnership work between rangers and volunteers.

In the winter of 2011/12 the volunteer lengthsmen highlighted and reported a number of potentially deteriorating problems with the path during their routine drain runs. The issues identified included the need to improve drainage at several new locations to prevent water flowing further down the path, the need to generally block and landscape out a multitude of emerging shortcuts and bypass routes to the principal path line, and the need to re-define and enhance the overall route through some sections that had become particularly narrowed and blocked by large boulders and adjacent rocks. 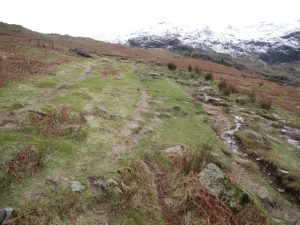 Part of the Old Man Lower path before work was undertaken

As a result of these lengthsmen concerns and reports, Ian Griffiths (an NT Ranger/Supervisor) undertook a detailed survey of the path between the Miners Bridge and the sheepfold in the spring of 2012 and a detailed programme of potential remedial and restorative works was then established.  Volunteer work on this initially identified programme began at the end of June 2012 and since that time there have been a total of 16 visits to locations on this path to undertake further work.  105 volunteer days have been contributed with 37 different lengthsmen having participated so far.

The Old Man Lower path overall has now been restored to a single path with effective drainage. Our work will continue on this path over the coming months and years to ensure it remains in good condition. 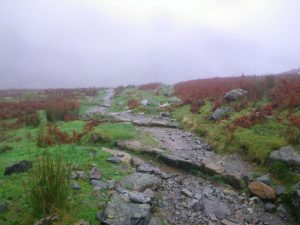