Runners who enjoy the Lake District fells have made a significant contribution towards the upkeep of the areas they love.

Dallam Running Club, a small running club based in the South Lakes, has raised £1000 for Fix the Fells, the project which repairs and maintains the upland paths they use.

Joanne Backshall, Fix the Fells Programme Manager, said, “We are delighted to receive this substantial donation from Dallam Running Club and we are very grateful to them for their support.  It is great that they can utilise the beautiful Lakeland fells on their doorstop for their hobby, whilst recognising the impact they may have on that landscape.“

Paul Sewell, Secretary of Dallam Running Club, said, “We enjoy running in the Lake District and are keen to give something back to help maintain the paths and fells we use.  Our members contribute through an evening run across Morecambe Bay as well as through their entry fees to two other racing events which the Club organises.”

The two races concerned are “The 20 Barriers Race” in early July based at Carnforth High School, and “The Arnside Knott Race” at Holgates Caravan Site with the support of The National Trust in mid November.

Fix the Fells aims to protect the spectacular Lakeland fells from erosion and damage by both repairing and maintaining the upland paths.  It is a partnership project between the National Trust, the Lake District National Park, Nurture Lakeland, Friends of the Lake District, Natural England, Cumbria County Council and over 100 volunteers.

In many areas erosion has led to vegetation being killed and unsightly scars being created across popular fells, like Scafell Pike and Helvellyn. Erosion also leads to soil being washed into streams and lakes and the loss of important animal and plant species.

Fix the Fells is working to improve these paths and to protect the beauty of this stunning landscape which is appreciated and enjoyed by so many. The work is carried out by teams of National Trust rangers along with more than a hundred volunteers.

One of the challenges will be to repair footpaths that were damaged by Storm Desmond in December 2015. More than 100 of these paths are scheduled to be repaired over the next 18 months.

Over the last 10 years the Fix the Fells project has brought significant improvements to more than 200 footpaths. 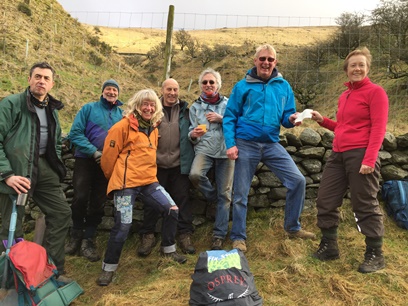