Just below the start of the Wasdale Head to Scafell Pike motorway there runs a discreet little riverside path linking the NT lakehead car park and campsite with the head of the valley, giving walkers a motor traffic-free alternative to tarmac.

In partnership with the Wasdale ranger team we are spending most of February rescuing sections of this path from flood damage as well as making it more accessible and clearly defined.

After crossing the footbridge near the old schoolhouse and then immediately branching right, the initial part of the route was squeezed between a dilapidated wall and an equally neglected fence… 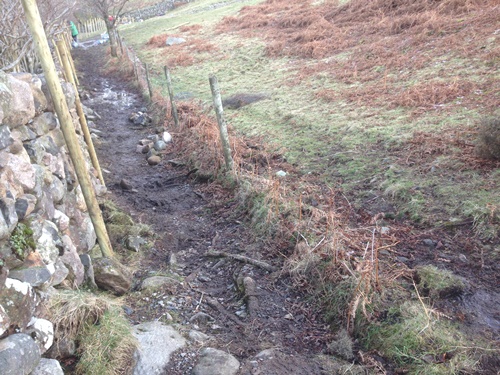 The limited space between the two features made for an uncomfortable passage. Rebuilding the wall to make it sheep-proof (with the addition of wall-top netting) allowed us to remove the fence, thus allowing more room and as a result less concentrated wear on the vegetation.

With a few nicely crafted stone waths to manage stream channels, – built with the help of FTF volunteers –  the new route is much enhanced and will allow grass to recover. Because of the relatively low footfall of this path (by comparison with the Lingmell Breast route above it) allowing people more room should prevent concentrated wear lines from appearing in the future. 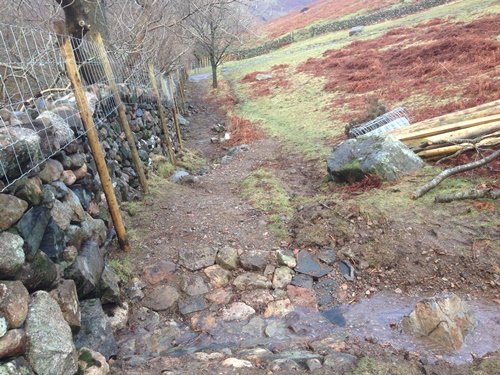 Further along the riverbank sections of the path will be realigned to take them onto higher ground, well clear of flood levels which have occasionally made the path impassable after heavy rain.

Nearer to the campsite a section of the route which traverses frequently submerged low lying ground will be raised onto a boardwalk to ensure it’s accessibility – most of the time! (We’ve learned not to be too overconfident when predicting rainfall levels). This part of the project will be undertaken in mid march with a working holiday group.

As March progresses we will begin the annual search for stone-bagging sites, and by mid April we will have migrated back onto higher ground.