Giving Back in the Fells 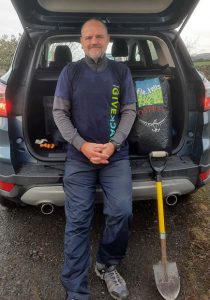 Through their ‘Give Back’ program, the company I work for supports a number of charities each year through corporate events such as Coffee Mornings, Cake Sales, Foodbank Donation events and participation in sponsored team events such as ‘Tough Mudder’. Alongside this, each employee is gifted one ‘Give Back Day’ on top of their usual annual leave in order to take part in charity or volunteering activities. Below is the story of how I used mine for 2020, supporting an organisation already close to my heart.

During a continued spell of inclement weather, I made final preparations for my ‘Give Back’ day, which I was going to spend out as part of the Fix the Fells team on a ‘path maintenance day’. In essence, Fix the Fells is a team of skilled National Trust rangers who, along with a team of volunteers, such as myself, repair and maintain the mountain paths in the Lake District National Park, now a UNESCO World Heritage Site. Even under normal circumstances, the millions of feet that tread the paths of the Lake District, along with increasingly extreme weather events, take their toll on the fragile landscape, however this year has seen this pressure increase hugely. Driven by the Covid-19 Pandemic, which essentially curtailed foreign travel, we have seen a massive increase in visitor numbers to the area, many of whom had never been to the Lake District previously. This, combined with ongoing restrictions on the size of the teams that could be deployed, means maintenance activity has struggled to keep pace with the damage being done to the path network. Even as I throw the final things in to my pack and check I have my waterproofs, I am aware that there are only two of us going out this morning on a route that would normally take 4 to 6 people to clear effectively. 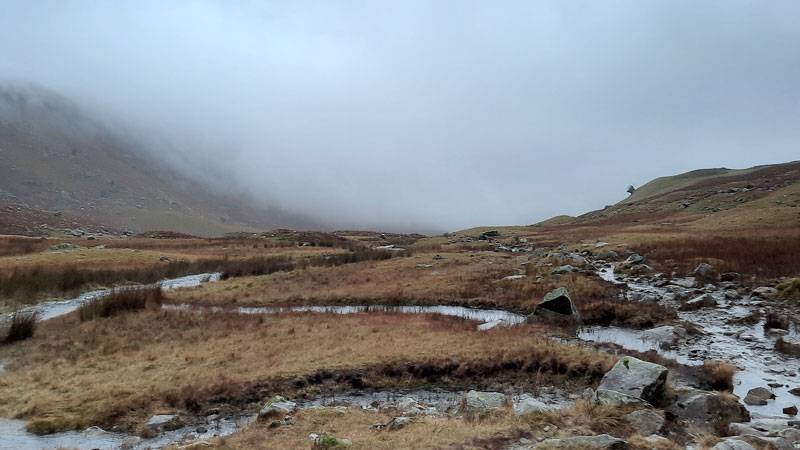 I have been a member of Fix the Fells for a number of years now, driven as most of the team are by a desire to give something back to the landscape that they love walking and climbing in. In general there are teams out most days of the week, repairing paths, clearing the path drains of debris to ensure they run well, as well as building new sections of path in areas of heavy foot traffic and re-landscaping areas that are damaged either through heavy foot fall, or as a result of extreme storm damage. Given the increased workload this year and the limitations on team size as I discussed earlier, having the opportunity to use my ‘Give Back’ day to provide extra support to the ongoing maintenance effort was fantastic.

Arriving in Grasmere, it was evident that the weather wasn’t going to change, but nevertheless we kitted up and headed off. Our planned route was to head out from Grasmere to the top of the Far Easedale valley. This isn’t a particularly long route in Fix the Fells terms, around 12km there and back, but the valley path is a popular access route to some of the larger fells around Grasmere and so sees a lot of foot fall. Each path is graded, red, amber, green etc., based on how often they need to be run, 3 monthly, 4 monthly, 6 monthly etc. and Far Easedale is a red route. The work for the day consisted of clearing the fell drains that cross the path at numerous points, as well as clearing debris off the sections of the path that have been ‘hardened’ using stone pitching. Clearing the drains ensures that water from the multitude of small streams coming down the sides of the valley does not run down the path itself, adding to the erosion directly, or forcing walkers off to the sides of the path, damaging the very fragile land either side. Strange as it may sound for a mountain path, clearing small stones and other debris from the hardened, stone pitched sections also encourages walkers to remain on the path, again aiming to ease erosion of the surrounding areas. 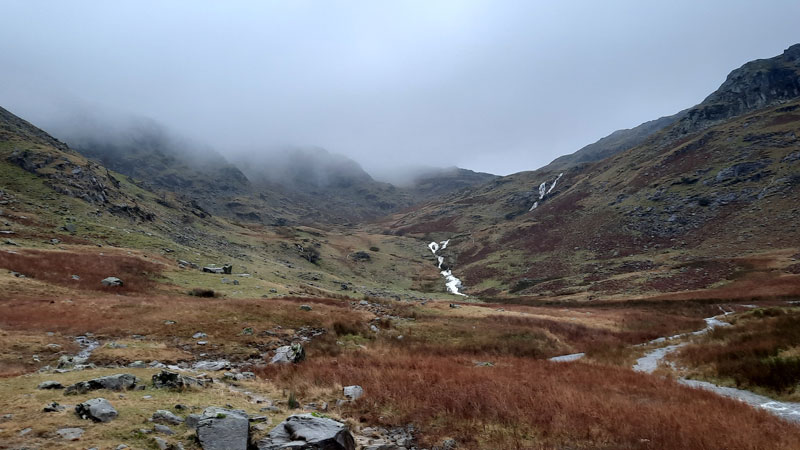 As we got higher up the valley it was clear the weather had no intention of easing off any and the cumulative effect of several days of heavy rain had had a major impact on Far Easedale Gill. I have been walking these Fells for a good number of years and it is not often you see the gill as high as it was this day. In fact the amount of water in the gill actually prevented us from completing the whole route. About 5km into the route and less that 800m from the head of the valley the path crosses the gill, at least it normally does. Today however, there was so much water in the gill that it made a safe crossing impossible. We searched for a different way to cross, but with no luck. The main channel was in spate and even the side channels were so full we couldn’t safely cross anywhere and so eventually we had to make the decision to abandon this final, top section of the route for today. The path will be there another day, our priority was to make sure we would be as well. So, we stowed the tools we wouldn’t need any more and headed back down the valley to Grasmere, soaked and a little disappointed, but at least we knew the majority of the work had been completed. All that remained when we got home was to log that the route had been done and plan what to do the next time we could head out. 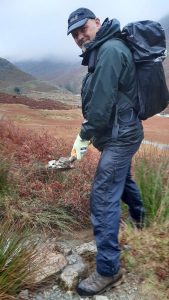 Fix the Fells volunteers come from all walks of life, some are local and some travel long distances from outside of the Lake District each time they volunteer. The one thing that draws us all together, as I said at the start, is a desire to help protect and maintain this landscape we all love. Come rain or shine you will find odd looking bands of shovel wielding ‘Lengthsmen’ (this is a generic term dating back to medieval times) walking the hundreds of miles of footpaths that criss cross the Lake District, each one more than happy to talk to other walkers about what we do and how they can do their bit to protect this landscape as well.

So that was my Give Back day for 2020, one piece of normality for me in a very strange year, let’s hope 2021 allows us all a little more.