Awarded to Richard Fox, Fix the Fells Ranger
Nominated by: OWPG Committee.
Awarded by a vote of the OWPG membership.

Richard Fox is responsible for the day-to-day repair and maintenance of the Lake District upland paths through Fix the Fells. Over the last 18 years he has directed the repair of over 250 paths. This includes sourcing stone from as close to the work sites as possible, arranging helicopter lifts, working on the specifications and landscaping requirements, and being responsible for quality assurance. In this context Richard manages one of the most successful volunteer programmes in the Lake District.

The ‘Lengthsmen’ scheme undertakes the vast majority of the maintenance work – nearly 2000 volunteer days each year – freeing the National Trust and National Park rangers to focus on larger project work.  Richard has shared his knowledge with path workers in Scotland, Wales, Ireland and beyond.

Without Richard, the massively popular paths of the Lake District would be in a much worse state of repair and the fells would be scarred with human erosion. His work also helps improve the water quality of the streams, becks, tarns and lakes by reducing the soil washing into water network.

Richard said, “‘It is a great honour to be awarded the OWPG Golden Eagle Award. I have been really lucky to spend the last 18 years working in the fells, doing my best to conserve their beauty, and working with a fantastic team of people. That team of course are the people who really deserve an award – particularly the National Trust path Rangers and the Fix the Fells Volunteer Lengthsmen who work tirelessly on the fell paths in all weathers. The fells are under increasing pressure from the constant pounding of feet, increasingly extreme climatic conditions and the current popularity of mass challenge events. There will always be lots of work to do to keep the fell paths in reasonable order to protect the fells themselves. I am very grateful to the OWPG for recognising the importance of this work, and their help over the years to spread the word to users and lovers of the fells and the general public.’

About the Guild
The Outdoors Writers and Photographers Guild is a not-for-profit association comprising writers, journalists, photographers, illustrators, broadcasters, film-makers, artists, web designers, publishers and editors. Our members share the common bond of a passionate interest in the great outdoors. For more information, please visit www.owpg.org.uk 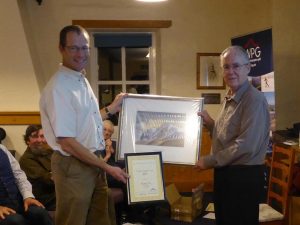 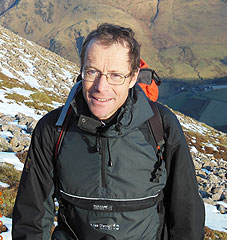 Richard receives his award from Peter Gillman, OWPG Chairman and Richard above Buttermere in the Lake District