Location:
A route from the east up to Three Tarns, between Bowfell and Crinkle Crags. Grid ref: NY258055.

Path use:
A quieter alternative to ‘The Band’, taking in an impressive waterfall and a dramatic gorge.

Historic interest: Historic route for gathering sheep from the fell under Crinkle Crags.

The problem:
The lower section of the path is generally in good condition with the exception of the one area pictured below, where erosion of the path has allowed water to get in and caused an impressive blow out. Walkers are keen to avoid this and so a new path line is appearing on the hillside above it, which will eventually wear down to increase the size of the hole.

Repair techniques:
Create a stable line by constructing a large, rough revetment wall for the path to go over. This will provide a sustainable surface that will help prevent further water and footfall damage.

Materials needed:
75 bags of stone will be flown from the surrounding fell side.

Timescales:
The work was completed in 2010. 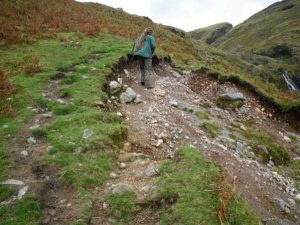 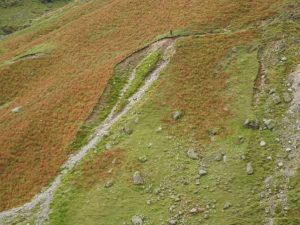