There are times in the mysterious West when one feels a sense of having performed the exact same actions before. Seeing a speck in the distance grow into a helicopter delivering a bag of stone against the backdrop of Wastwater and the coastal plain is certainly one such experience. 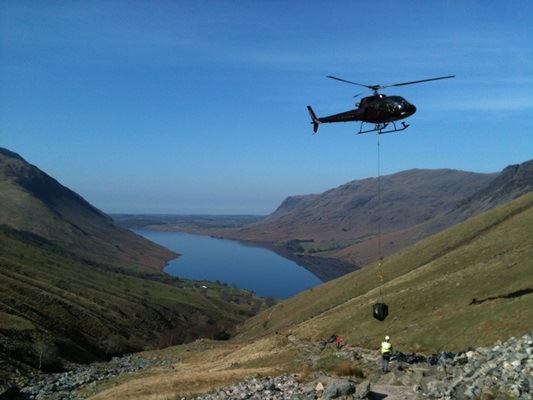 As the tide of people making their way up Scafell Pike from Wasdale Head continues relentlessly we have to decide where our yearly ration of stone could be most effectively used. Not being in a position to remedy the problem in one single campaign due to the sheer scale of the task before us we have for the last 3 years resigned ourselves to tackling the task of reconstruction by annual instalments.

Rather than simply start at the bottom of the path and rebuild / widen year by year in succesive sections we are identifying areas which are most urgently in need of repair, where  damage is accelerating.

Several sections of the route previously constructed are actively disintegrating, with increasing amounts of cascading debris threatening to overwhelm surrounding vegetation. Other stretches are turning into deepening gullies littered with loose boulders 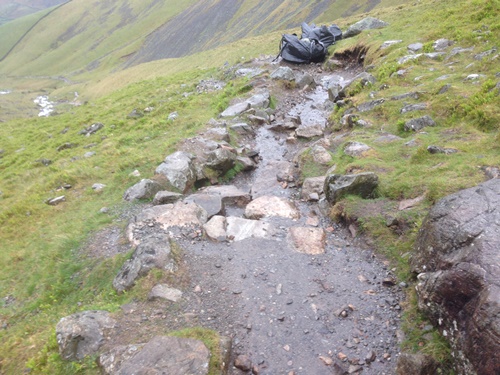 After reviewing the situation a series of 10 – 30 metre long sections in the middle reaches of the Brown Tongue path been chosen for this year and 74 bags of stone have been flown to site. For the third year in a row we were quite lucky weather-wise, with clear visibility – 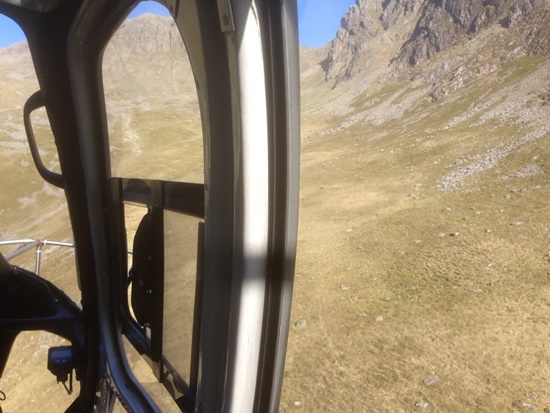 which allowed us to get all the bags in the right places all in the same day.

We will be able to re – use much of the existing stone from pre – helicopter days, blending the smaller hand collected pieces with larger flown blocks to create a wider and more directly aligned section of path.