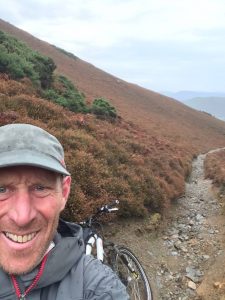 As further repair work starts on a section of upland path at Stoneycroft near Derwent Water, a Keswick man with Multiple Sclerosis will be able to enjoy more of his local Lake District fells.

Duncan Booth says he has been able to go further into the fells thanks to the work last year of Fix the Fells on the path near his home.

Now these benefits will be extended as a machine is used to repair the next section of the path, which was damaged by Storm Desmond in December 2015.

The path will not be closed during this work and signs will be displayed to warn and keep people away from the machine for the short period it is operating.

This is part of the Lake District National Park’s “Routes to Resilience” project funded by the European Agricultural Fund for Rural Development via the Rural Payments Agency.

Machines are used to repair some upland paths where the problems are too large to be tackled by hand. In these situations machines are the most environmentally sensitive way of addressing large scale erosion problems. 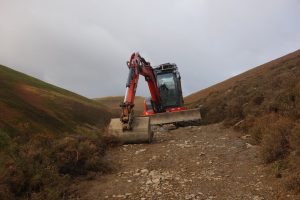 Machines are used to create paths of soil and gravel with humps and hollows which disperse the damaging rain water from the surface. These are then usable by Duncan on his electric bike.

Joanne Backshall, Fix the Fells Programme Manager, said, “The primary aim of Fix the Fells is to repair paths damage by erosion and hence protect the landscape, not to make paths more accessible or safer, but we are delighted that our work has wider benefits such as helping Duncan Booth to get out in to the fells.“ 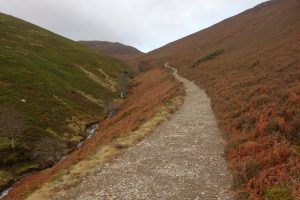 “We mostly repair paths by hand but sometimes using machines is the most appropriate method. Eroded paths concentrate rain water into a damaging force which quickly worsens the situation and creates large gullies and scars. Our approach is often “a stitch in time saves nine” to prevent this happening. Repaired paths quickly revegetate so that they become less obvious but retain their improved and more resilient surface.”

Yvonne Booth, Duncan’s wife, created the popular 10in10 Challenge in response to her husband’s diagnosis with MS. Participants of the many events fundraise for MS research and have raised a magnificent £341,000 so far.

The aim of the Fix the Fells partnership is to protect the spectacular Lakeland fells from erosion and damage by repairing and maintaining the upland paths of the Lake District.

Fix the Fells needs £350,000 a year to complete its upland path repair work and this comes entirely from donations and grants. All financial support is gratefully received and more information on how to do this can be found on our website www.fixthefells.co.uk.