With help from staff and volunteers carrying and filling bags for our main project at Far Easedale, we’re on track to be complete for the helicopter lifts. 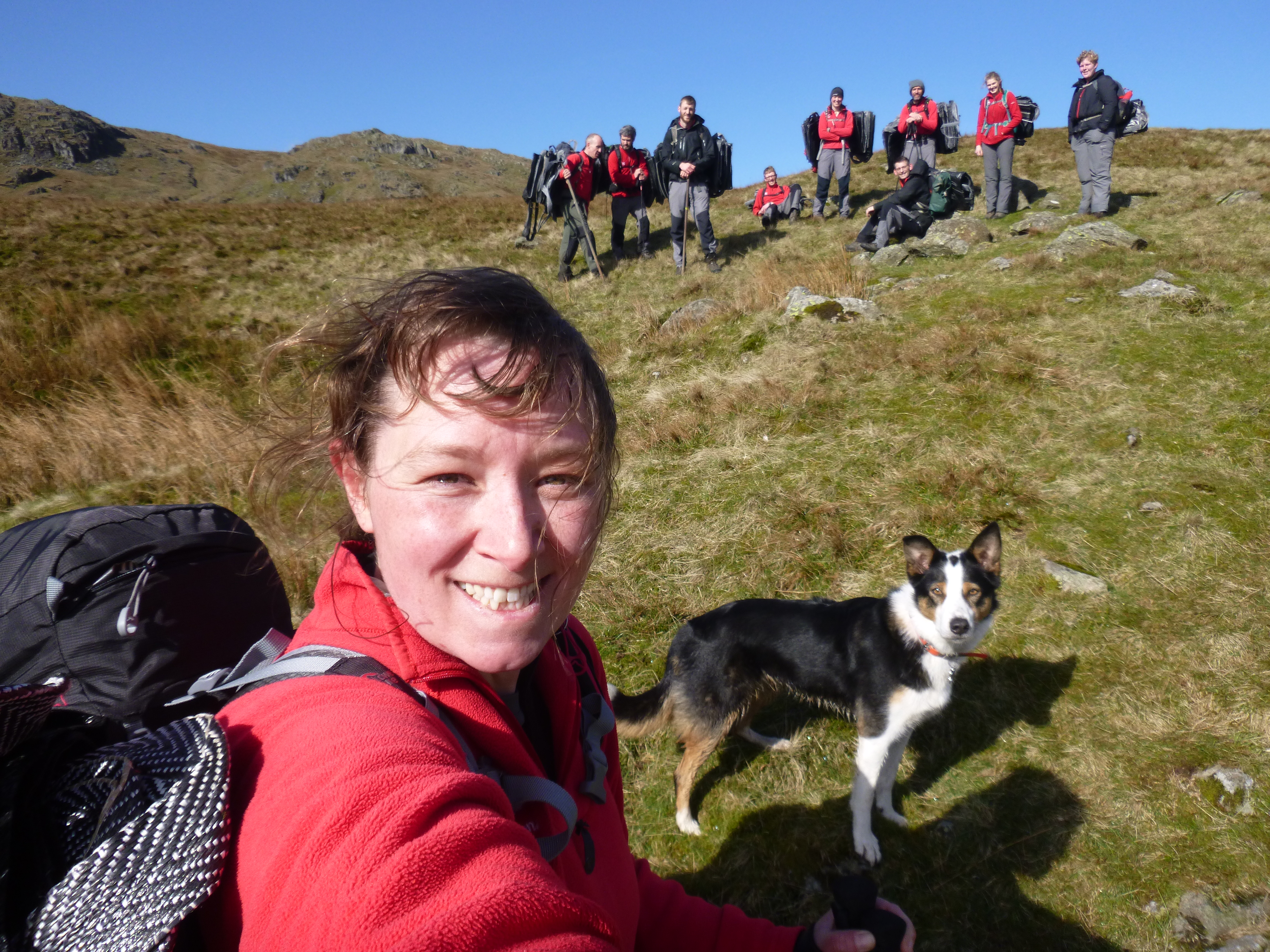 We had three work placement students from Ambelside university, who gave a couple of gruelling days bag filling. South Lakes rangers carrying up and filling about twenty bags. As well as Heart of the lakes helping out.

Heart of the Lakes who offer a wide range of self catered accomadation ranging from farm houses to cottages have been donating money to Fix the fells for over 20 years. Sarah Anderson, the so-called ‘Our Woman at the Top’ – has been funded by these donations since 2012.

As well as donations this year they spent a daycarrying bags with the team, and plan to take our final 30 bags upof their own esteem. Great! 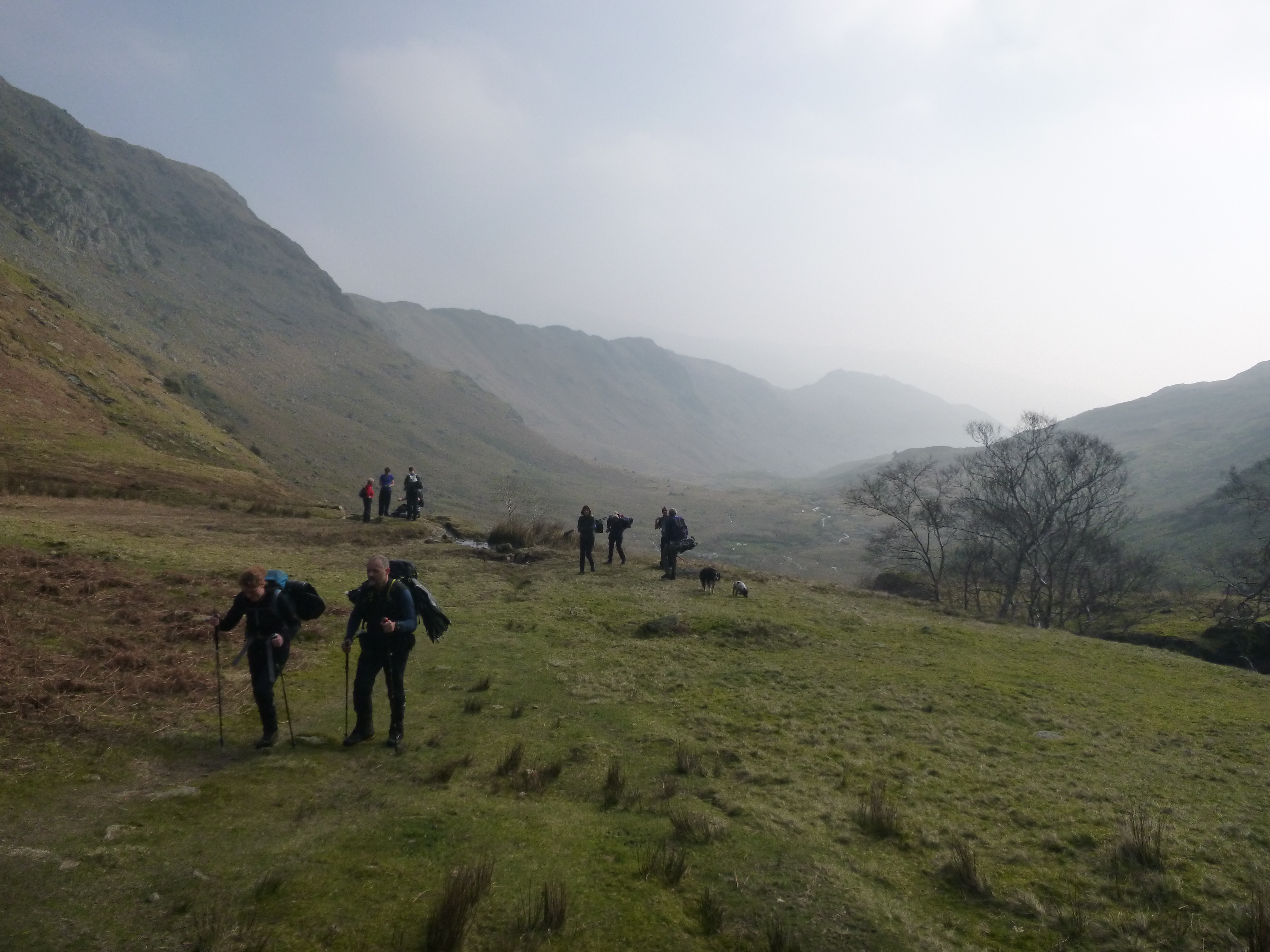 Heart of the Lakes.

Just below the bag fillings spot on Far Easedale, is a site of archaeological interest. A shieling have been identified here which is is a hut, found singly or in small groups. They served as temporary, summer, accommodation for people involved in transhumance. Transhumance is the removal of stock from permanent dwellings to exploit areas of summer pasture some distance away from the main settlement. In England most shielings occur in upland areas such as the Lake District, eastern Cumbria, Northumberland and western County Durham. Historical documents suggest that the use of shielings was mainly confined to the period up to the 16th century. The photo below gives you an idea where the Sheiling would have been located, below the rocky slope within the flatter area. 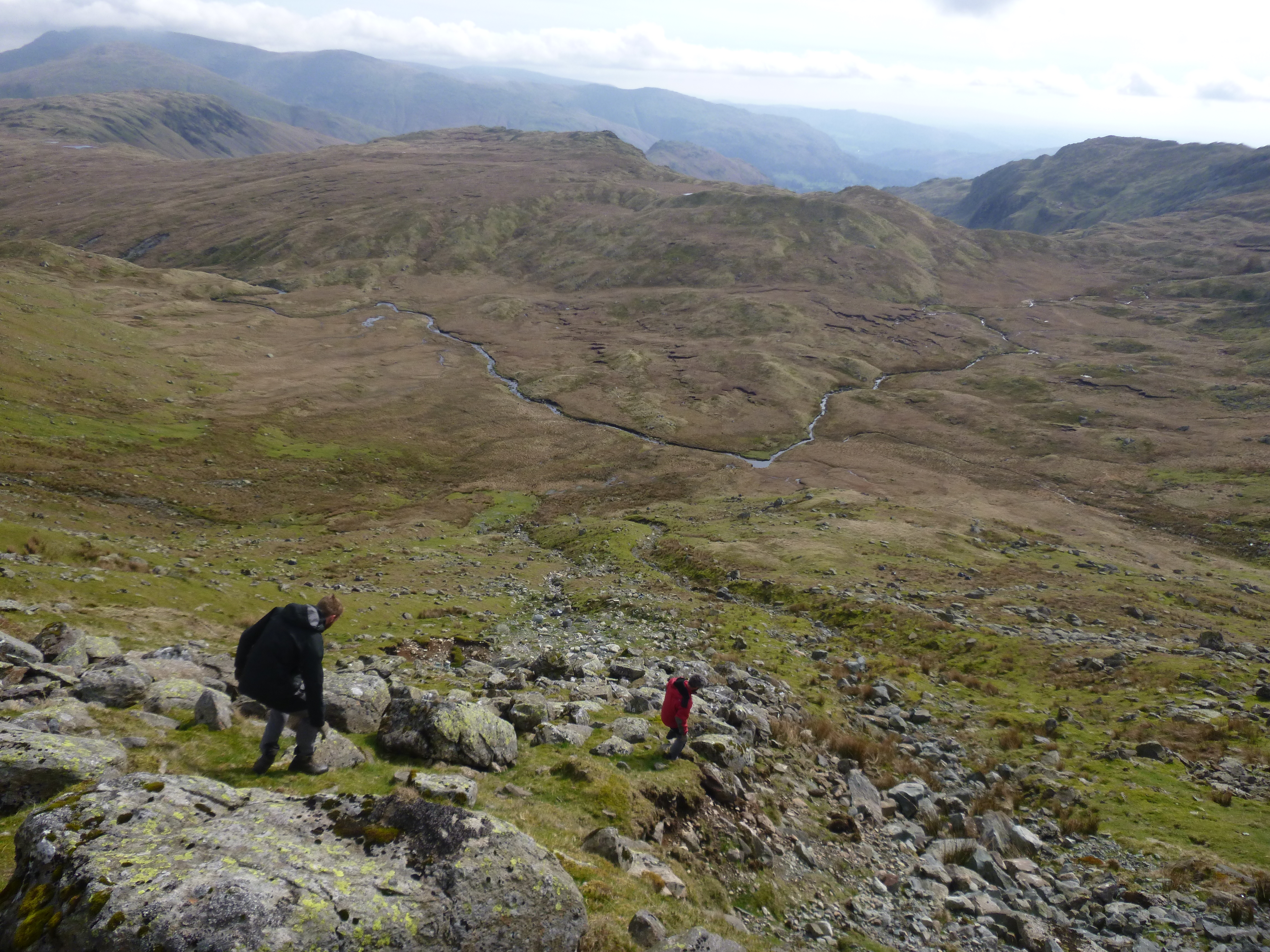 Since walking up Far Easedale the most noticale nature has been the frog spawn – trying to avoid stepping in it along the path, and the active sound of sky larks. 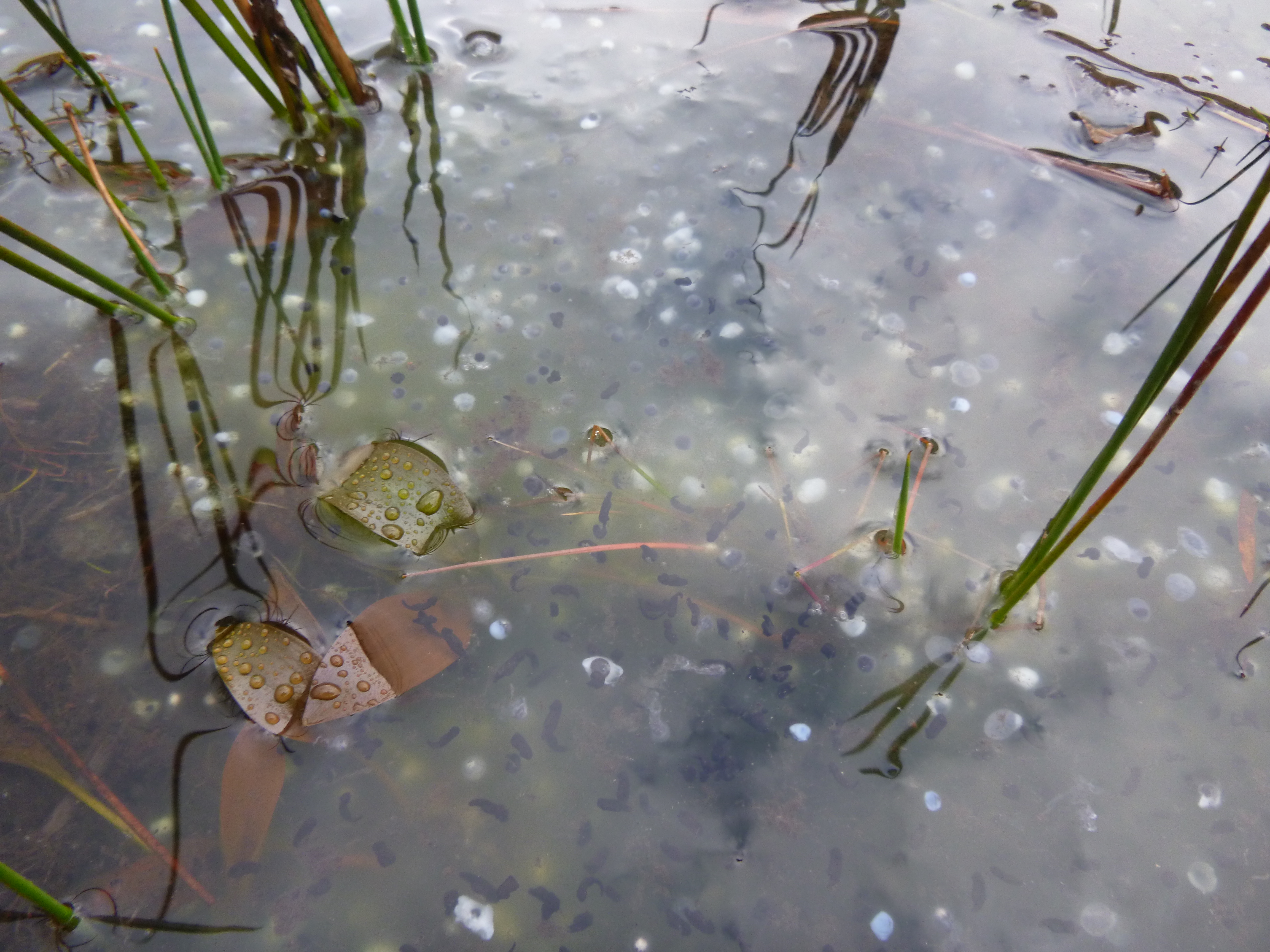 Back to bag fillings of a different kind. Some of the flood damage from storm Desmond has provided us with loose material that has been bagged up to consolidate a gullied path further down. However there is plenty of digging left to unearth path and the dry stone wall. 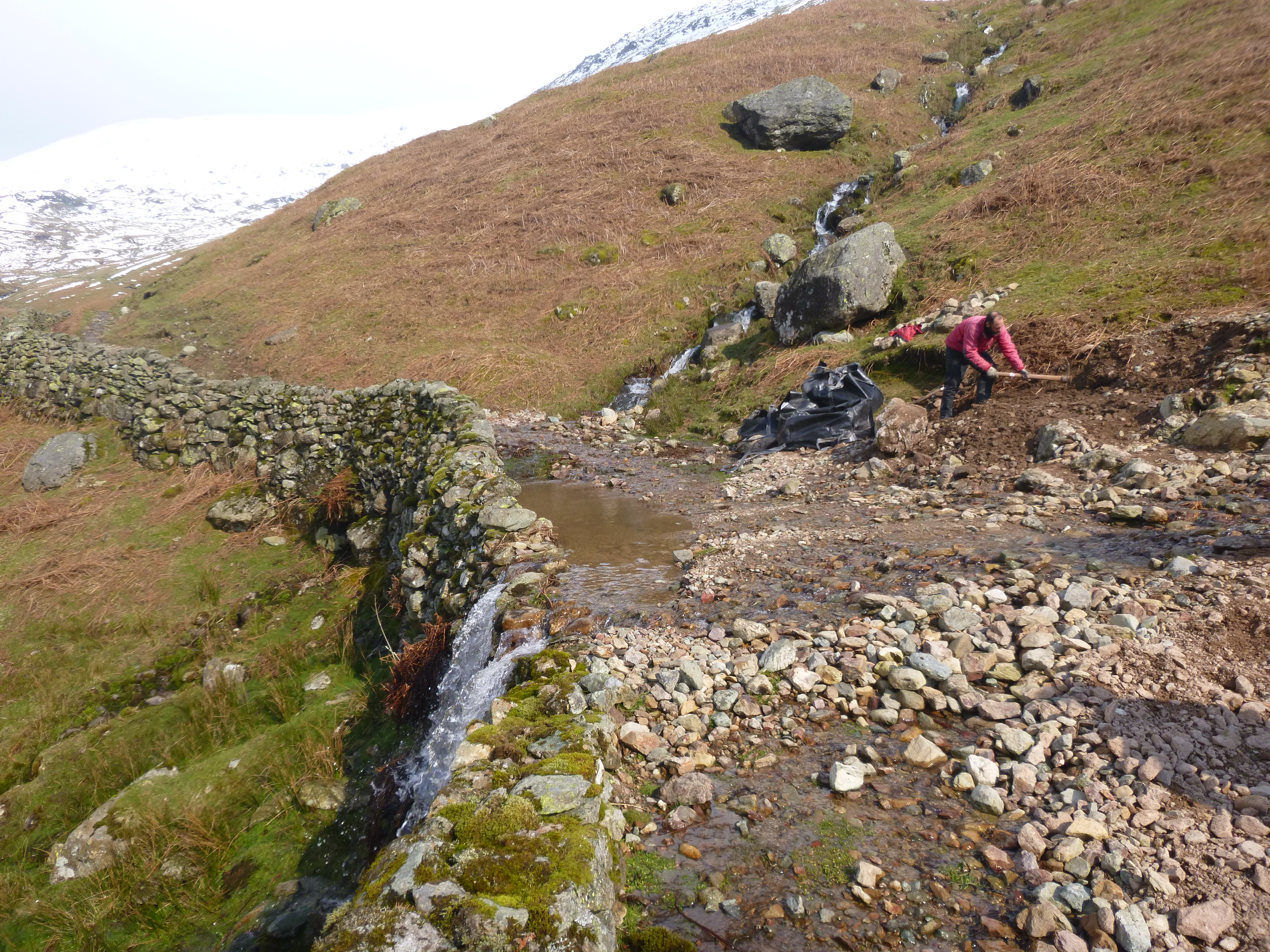 Wansfell at the back of Ambelside is hugley popular due to its accessibility, views, and being one of the less strenous walks in the Lake District. Prevoiusly the edge of a lower part of path had been landscaped, to deter folk from straying off the path. Phase two of the operation has been to plant a mixture of trees such as Hawthorn and Oak to break up the grassed area. Not only does tree planting discourage people from wanding off the path adding to erosion, it also stabilizes and enriches the soil and provides a habitat for birds and insects. Lets not forget the majority of the fell were once wooded, and often the only remnants are trees lining the sides of becks and ghylls. 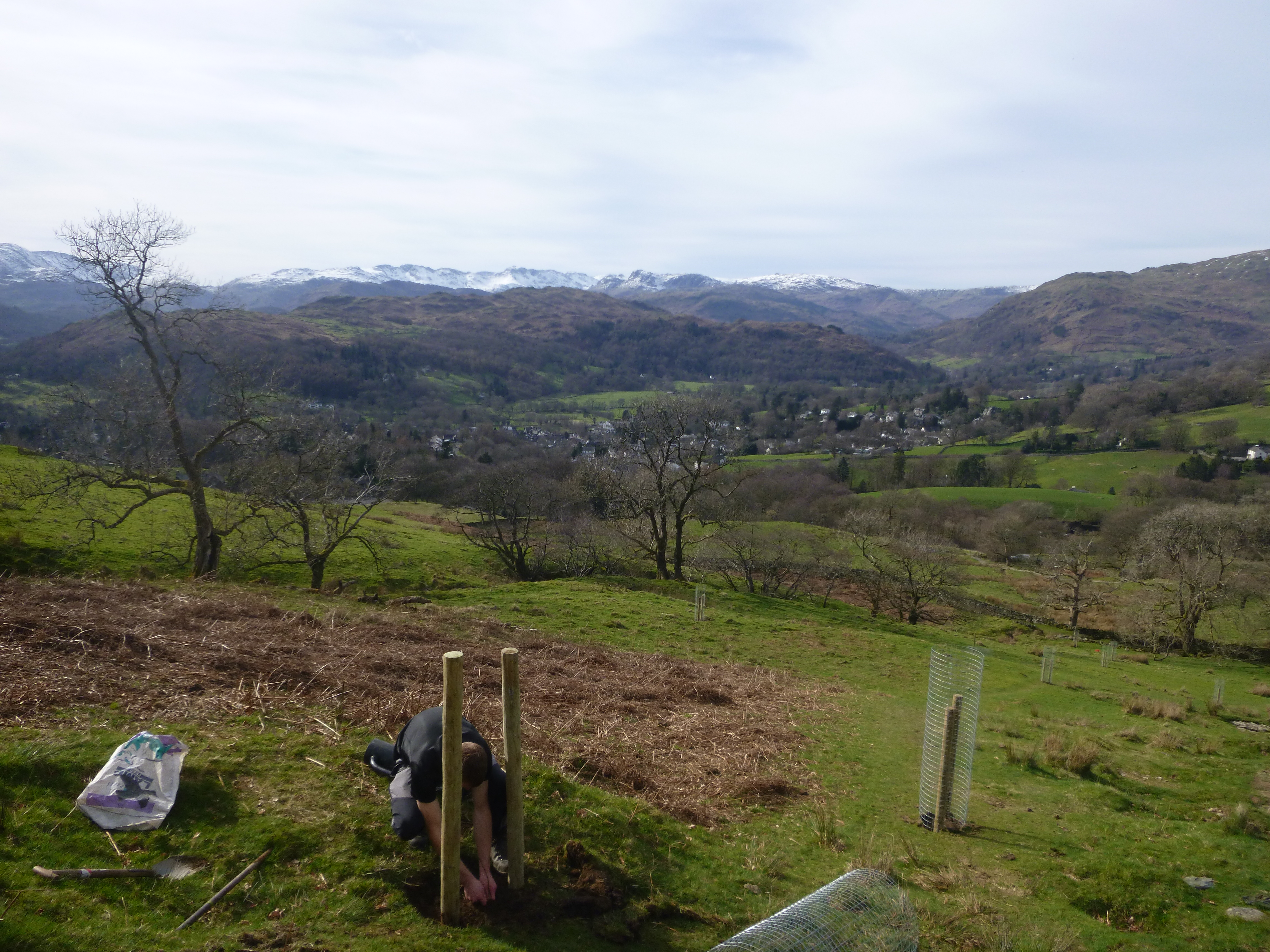 Thanks again for everybodys contribution to Fix the Fells projects.