Firefighters often refer to the “Fire Triangle” when explaining how they tackle fires.  A fire needs three elements to keep burning – fuel, heat and oxygen – and firefighting techniques are aimed at removing one or more of these elements. 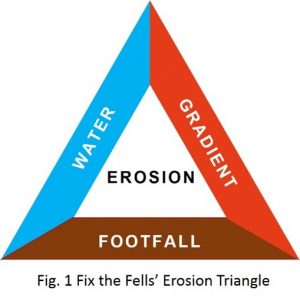 Fix the Fells tackle man-made erosion on the upland paths in the Lake District and imagine a similar triangle with three different factors that cause erosion – water, footfall and gradient.  When we consider the best technique to tackle erosion on a particular path, we have to work out what we can do about each of these elements, whilst leaving as little trace of our work as possible.

In reality, we have limited control over rainfall, numbers of visitors and the steepness of the fells.  The first two factors have increased significantly in recent years, with more extreme weather events and more people holidaying in the UK.  However, we manage the issues as best we can :

This case study looks at the particular factors that were taken into account when considering the best way to tackle the severe erosion on the Sail to Scar Crags path, either side of the col that lies between these two Wainwright summits.  The route is very popular, forming part of a number of popular circuits from both Buttermere and Newlands valleys.  The path that had developed on both sides of the col followed a so-called “desire line” with a steep gradient straight up the fell.

The vegetation on this hillside is particularly rare and important on a European scale and the area is designated as a Site of Special Scientific Interest (SSSi) and a Special Area of Conservation (SAC).  The vegetation is fairly short and easy to walk on, but very vulnerable to trampling.  Once the vegetation has been killed off by trampling, the thin soils get washed away by rain, resulting in a loose stony surface that is unpleasant to walk on.  Folk then tend to seek the next bit of vegetation, thus inadvertently widening the path.

Figs 2 and 3 Looking east towards Scar Crags and west towards Sail, both taken from the col in 2010

Before the work was carried out, the path was over 15m wide in places but was rapidly widening further, as the vegetation was being smothered by stone runoff on the downhill side, and many users chose to use the vegetation on the uphill side. With no containment and continuing high levels of use, the path would soon have been 25m wide in places and the problem wouldn’t have stopped there.   Natural England in particular were concerned by the degradation of the site as they are tasked with keeping SSSI and SAC sites in, or returning them to, favourable condition.

The two main issues on this path are the steep gradient and the natural inclination for folk to follow the straight desire line.  To deal with steep gradients, stone pitching is often used successfully :

However, this technique was discounted for a number of reasons :

The alternative to pitching was to build a n aggregate path of the type built successfully on other fells where the gradient permits :

Fig 5 Looking north towards Thornthwaite Beacon, Kentmere – Before from 2005, After from 2019 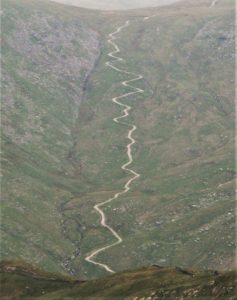 Aggregate path surfaces are generally stable on slopes up to 15o but the gradients up Sail and Scar Crags are considerably steeper than this.  For this reason, zigzags had to be incorporated into the design to reduce the gradient below 15o.  Zig-zag aggregate paths were used extensively in the Lake District on old pack horse routes – there are many examples in the Langdale and Ullswater valleys dating back hundreds of years.  There is a particularly good example in Mardale – the route up Gatesgarth Pass was an established transport link in the past, connecting Mardale to Kendal.

The new zig zag path between Scar Crags and Sail could have been installed level with the surrounding ground with turfed side ditches to keep water off the surface.  On some paths, the surrounding vegetation is thick enough or there are other landscape features to keep folk on the path.  Unfortunately, in this area there are no such features and the vegetation is so sparse that unsightly post and rail fences would have to have been installed to keep people on the path.  This solution was not considered acceptable.

Instead, the path surface was raised approx. 60cm so that, together with new side ditches, the changes in level would deter most people from leaving the path.  The work was carried out in 2010, the path was re-aligned and the area re-profiled to fill in the old erosion scars, to further reduce the risk of water damage and to allow the vegetation to re-establish itself.

The view of the paths from the opposite fellside do attract criticism as they look artificial, because not only of the line they take but also their colour.  The path surface is made up of material from the fell and was not brought in – it will always stay light in colour because of its heavy use.  However, it must be remembered that the erosion scars were also entirely artificial and man-made and, crucially, would have got worse over time.  The path surface is now stable with benefits for the surrounding habitat and the old erosion scars have been steadily stabilising and revegetating – the solution was the least worst option. 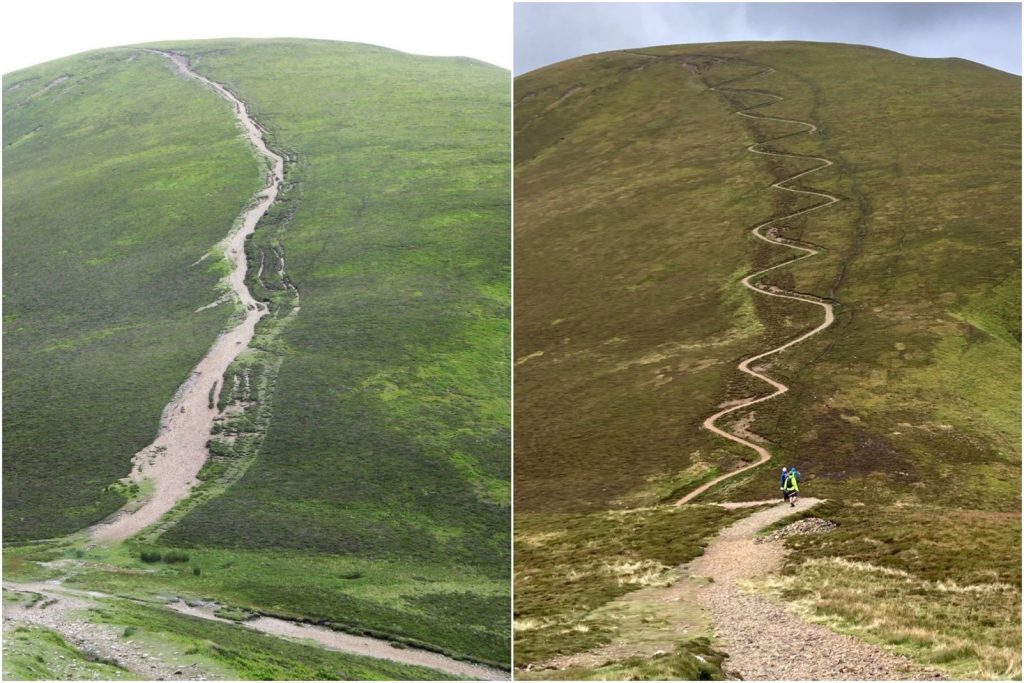