Fix the Fells uses spider digger for the first time 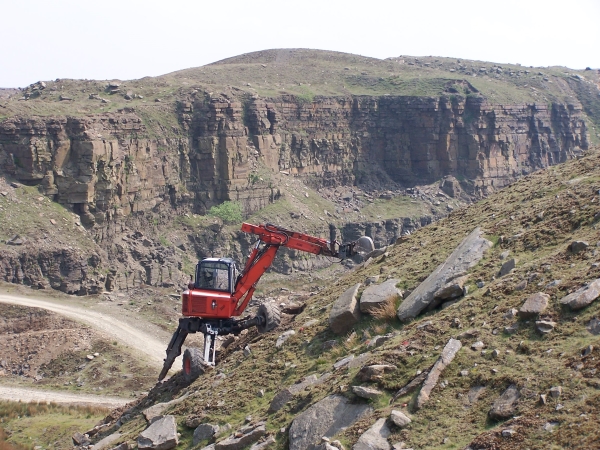 Fix the Fells will be using a spider digger for the first time in 2018 to repair storm damaged upland paths in the Lake District. This machine has legs instead of tracks and will be able to access and work on steep and remote areas of the fells.

Machines will be used on a number of upland paths in the Lake District to repair routes which were damaged by Storm Desmond in December 2015. This is part of the Lake District National Park’s “Routes to Resilience” project funded by the European Agricultural Fund for Rural Development via the Rural Payments Agency.

Fix the Fells mostly repairs eroded paths by hand with Rangers and volunteers using stone to create resilient surfaces. However machines are also used to repair some upland paths where the problem is too larger to be accomplished by hand. In these situations machines are the most environmentally sensitive way of addressing large scale erosion problems. Machines are used to create paths of soil and gravel of a greater length and volume than could be produced by hand in a time or cost effective way.

The spider digger will be used to repair the path on Maiden Moor near Keswick. The work is needed because the path there has eroded into a scar up to 10 m wide in places. The large numbers of people using the ridge route have caused the path to turn into a large drain. This gathers rainfall all along the ridge and sends huge volumes of water down the side of Maiden Moor to Manesty. A large, ugly gully is being scoured out on the hillside and all the eroded material is being swept downhill, cascading over a dry stone wall and into the woodland below.

The spider machine will be able to make the path narrower and install humps and hollows along the route. These will disperse the water in small quantities to either side of the path at every opportunity. Defining the path will encourage users to stick to the route and help prevent the ever widening erosion which is currently occurring.

Tracked machines will also be used in 2018 to undertake repairs on other fells paths, including routes on the Helvellyn ridge such as Keppel zigzags and Raise to Sticks.

The aim of the Fix the Fells partnership is to protect the spectacular Lakeland fells from erosion and damage by repairing and maintaining the upland paths of the Lake District.