Tim Farron MP and the head of the National Trust visited the Lake District to celebrate 10 years of the work of volunteers who help to repair and maintain some of the most popular paths in the mountains.

Dame Helen Ghosh visited Tongue Gill near Grasmere to meet the volunteers at work.  She joined them in helping to re-route and repair sections of the busy Wainwright Coast to Coast route which was damaged by landslips in Storm Desmond in December 2015.

Over the past 15 years Fix the Fells has brought significant improvements to more than 200 paths in the Lake District fells. The work is carried out by teams of National Trust Rangers, who work on behalf of the partnership, along with an army of over 100 volunteers.

The volunteers are called “Lengthsmen” – a term from medieval times when lengthsmen would be paid to walk the length of the parish and repair any roads and unblock ditches.

Barry Capp, Fix the Fells Volunteer Lengthsman, said, “Fix the Fells is so important to the volunteers that in 2016, 126 volunteers contributed a total of nearly 2000 work days to Fix the Fells.  This included walking the fells every Friday and Saturday to clear out the drains on over 200 paths and repairing damaged paths during 90 days of organised work parties.  The volunteers involved love the fells and want to give something back to the landscape they enjoy.  They also enjoy the camaraderie and satisfaction of helping to keep the fells in good order.”

Tim Farron, MP for Westmorland and Lonsdale and outgoing Leader of the Liberal Democrats, said, “We live in one of the most beautiful parts of our country with amazing walks and stunning scenery. However, it takes a lot of effort to keep the fells in good condition and to maintain the paths that we all use and enjoy. This 10 year anniversary is a reminder and celebration of the fantastic work of all those volunteers whose hours of dedicated hard work helps to keep our area looking the way it does. I’d like to thank all the volunteers who have worked on the Fix the Fells project over the last ten years – it is their commitment that allows the rest of to enjoy these paths and protects our beautiful landscape.”

Mike Innerdale, Assistant Director of Operations for the North, National Trust, said, “The Fix the Fells Volunteers do a fantastic job and we could not look after the Lake District paths and fells without their help.  They have developed and organised their efforts into an exemplar scheme which is now being copied across the country.  Their commitment, drive and enthusiasm are a constant source of awe and inspiration to us and we would like to thank them from the bottom of our hearts.”

Richard Leafe, Chief Executive, Lake District National Park, said: “Volunteers put in a huge amount of time and hard work every year, making a massive difference to the paths and fells loved by so many. This is a great opportunity to thank them all for their amazing contribution in helping people enjoy the spectacular beauty of our national park.”

Simon Humphries, Area Manager for Cumbria, Natural England, said, “Fix the Fells is developing the expertise to fix mountain paths, with the help of the volunteers, and manage the impact of the 16 million visitors who come to the Lakes each year.  Erosion leads to unsightly scars across the fells which mar the landscape.  Vegetation is killed and large volumes of soil and stone is lost, particularly from popular fells like Scafell Pike and Helvellyn.   This is washed into streams and lakes where it is harmful to important animal and plant species.  The work of Fix the Fells helps to protect the wildlife and landscape of the area for future generations to enjoy.” 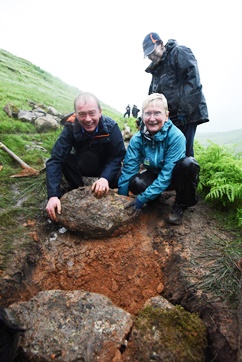 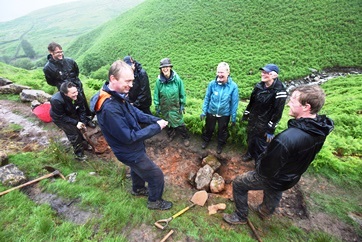 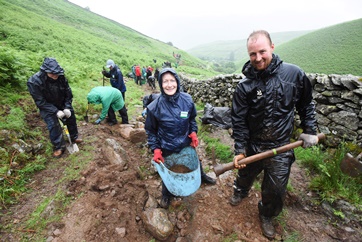 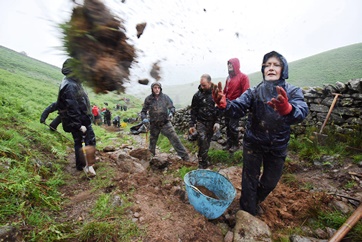