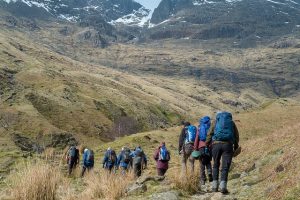 Fix the Fells Volunteer Lengthsmen have been busy repairing and maintaining upland fell paths in the South Lakes with thanks to the help of £3,000 funding gratefully received from the Gannett Foundation at the start of the year.

Over 75 volunteers have spent more than 276 days in the first three months of 2018 looking after the paths in the South Lakes.

This has included 59 “drain runs” which involve volunteers venturing on to the fells in all weathers to clear the drainage channels in the paths. This makes sure damaging water is shed from the path surface so that erosion is reduced.

The paths they have maintained and repaired include those around the Langdale valley and in the Coniston area. They have completed some repairs to the path up the beautiful Sourmilk Gill near Grasmere and are continuing their work on the popular path up Wansfell from Ambleside.

Barry Capp, Fix the Fells Volunteer Lengthsman for the past 10 years, said, “Despite winter conditions lingering on the high fells for a considerable time this year we have successfully managed to get a good amount of Fix the Fells work done and look forward to the start of Spring proper!”

Joanne Backshall, Fix the Fells Programme Manager, said, “The Fix the Fells Volunteer Lengthsmen are an inspiring group of extremely motivated and committed people who love the Lake District fells and want to do something practical to look after them. The generous donation from the Gannett Foundation is invaluable in contributing to the travel costs of the volunteers as they go about their work in the South Lakes every week of the year. Without the efforts of the Fix the Fells volunteers, the paths and the landscape would be in a much worse condition and the local economy would suffer as a result.”

The £3,000 has been awarded by the Gannett Foundation, the charitable arm of Gannett Co Inc, the parent company of Newsquest Media Group, whose titles include The Westmoreland Gazette.

Awards are made to registered charities and in the last ten years the Foundation has donated millions of pounds to Charities.