Historic interest:
In early 2008 a member of the public noticed strange looking stones along the path, which had become exposed as the peaty ground was worn away by feet and water. Archaeologists were called in and discovered six small working floors where people had stopped to make rough-out axes and other tools during the Neolithic period. The stones were the piles of waste flakes left behind at the work sites several thousand years ago. The experts were keen to preserve the remains of the ‘axe factory’ so photographed and recorded it using GPS. They then requested the path was repaired as a priority to prevent path erosion damaging the archaeology.

The problem:
Part of the path leading down onto the moor had been heavily eroded, creating a large scar in the surrounding peat. Below this, the path virtually disappeared as walkers were forced to cross a very large, very deep bog by taking whichever route looked the least treacherous. Trampling was starting to damage the fragile ecology. Due to the extensive erosion from repeated footfall and the action of surface run-off, large peat ‘hags’ had formed and were receding due the exposure to the elements.

Repair techniques:
Work started in summer 2009 with a large drain being dug above the work site to divert water off the route of the path. Creating a stable path over the wet spongy ground around the bog was not straightforward.  Digging deep into the peat would have disturbed the sensitive archaeology, and if stone and gravel had simply been laid along the route it would have sunk into the bog and disappeared.

Instead a shallow trough was dug along the line of the path and filled with rolled up sheep fleeces, laid two deep to overlap each other. The fleeces were squashed down and then covered with stone and gravel which creates a solid sustainable surface. The layer of wool acts as a permeable layer between the path surface and the peat below, and allows the path to ‘float’ above the wet ground, rather than sinking down into it.

While the method might seem innovative, it is actually developed from ancient engineering techniques for building routes over waterlogged ground.

Turf from the trough is being used to landscape and restore the areas of exposed peat and subsoil on the scar.

Timescales:
The work was completed in 2010 but further work using sheep fleeces in this area continues. 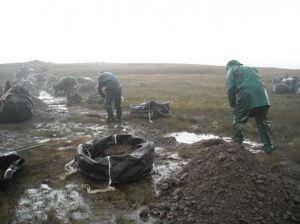 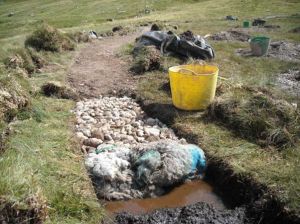